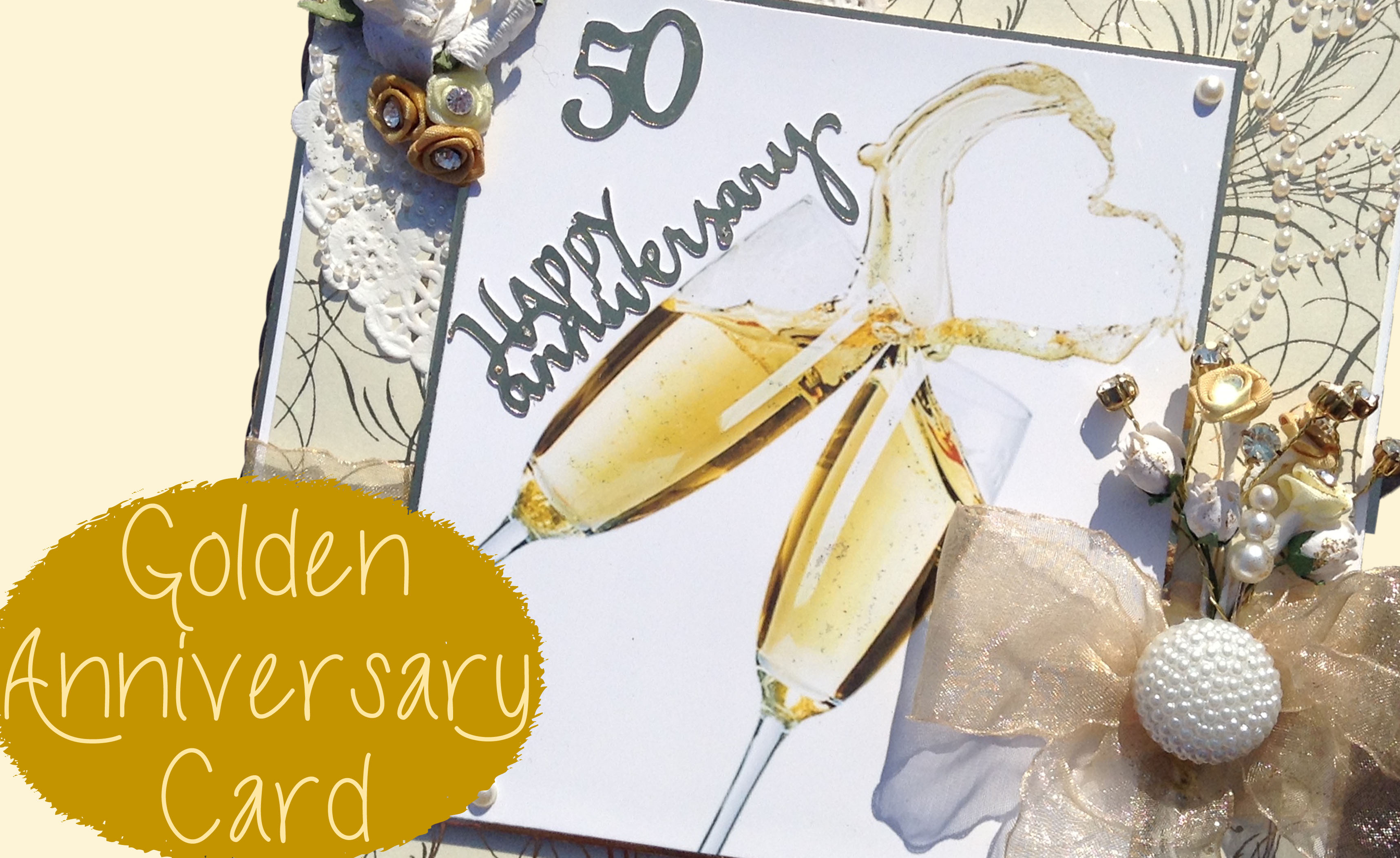 I don’t except very many commissions and in fact there only a couple of people that I will make specific cards for. This lady is one of the ‘lucky’ few (lol!) and she has had a number of cards from me in the past. This means that to certain extent she really leaves it up to me to design her cards.  This is another reason I select only a few people to take commissions from as I find that a lot of people want to ‘tell’ me what they want their card to be and that doesn’t leave me any creativity.  This lady just tells me a little bit about the people I will be making the card for and if she has any particular elements she might want to have incorporated on the card for e.g. their names or ’50’ for the Golden Anniversary but otherwise she leaves it entirely in my hands, trusting me to produce something wonderful for her–how words not mine!

Just to explain a bit more why I only accept limited commissions, obviously a lot of my time is spent working on the videos and posts etc for this site, and that really is a full time job. However on top of this I also still help out in the family business  (we are the UK distributor and educator for a large American Nail Company – as in fingernails not ‘hammer and … ‘ lol! ). All this means that I don’t have a lot of time, or frankly desire, to accept commissions for cards. However as I said before there are a couple of people that I will make an exception for. Ultimately the reason for that is because the cards I make for them will make great projects to share with my lovely Lolliettes (that’s you! lol!). The cards that I make for these ladies aren’t the kind of cards I would be making normally as they aren’t the kind of card you would be this card isn’t going to be the kind of card you would make just to pop up at the craft fair, it simply wouldnt sell – not because it isn’t nice but because they just would be too expensive.

Now this particular card, rather strangely, was the second Golden Anniversary Card, inside as many weeks, that this lady commissioned me to make and this one was to be slightly less elaborate than the first. That said I still think it is pretty fancy and it is still and 8″ x 8″ card! I was also so lucky to find this royalty free image on the Internet and I am so sorry to say that I have absolutely no idea where I got it from any more. This is one of the last of my older videos that I haven’t yet edited for you and I cannot find the notes that I made about it. However if you search in Google for Champagne Glasses and then click the “image” tab at the top of the search page then I would think you should come across something similar that you could use. But please please do be sure to use only images that you have permission to use or ones that are royalty free, I don’t want to have to visit any of my Lolliettes in jail! LOL! What I will do is pop in below the video of the first Golden Anniversary Card for you just in case you missed it. But I think we’ve had enough chatter now so here is my Champagne Golden Anniversary Card video for you: –

Say that’s our video but as always here are some photographs so you can take a good look at the finished card. Don’t forget you can click on the images to make them larger, super-sized or even to start a little slide show so all you have to do is sit back and watch the pictures float over the screen in front of you – now that’s what I call good service! LOL!

Now as I promised above here is the video for the first Golden Anniversary Card that I was commissioned to do. A little bonus video for you to watch although if you’ve been watching me a while you may well have already seen this. Plus I also remembered a more recent commission of another Golden Anniversary Card and this one I made an Acetate Card for it. So I hope you will enjoy: –

So that’s it for today, I hope you have enjoyed our Golden Wedding Anniversary Cards, I would love to hear what you think and if you have made any special Wedding Anniversary Cards recently I would love to hear about them or even better to see a photograph (pop on over to my Facebook page to join the chat). But for now hugs and have a great craft day,