Hiya, today I have a fun Halloween card for you that I made by combining two Tiddly Inks images together:- Allison the Witch and a Book.  Tiddly Inks images come in PNG format which means that they come with a transparent background. So all I needed to do was drag and drop Allison onto the book image and resize her. Once that was done I printed her on to Copic Xpress It paper which has fast become my firm favourite for colouring on. I then coloured her in using my Copics, the colours shown below. I think she looked pretty cute, and I really loved how the book turned out. To give it all a final finish I curved the book over my Martha Stewart Pink bone folder to make it more dimensional and suddenly the pages looked so realistic. My Dad actually felt them as he thought I had multiple sheets somehow! 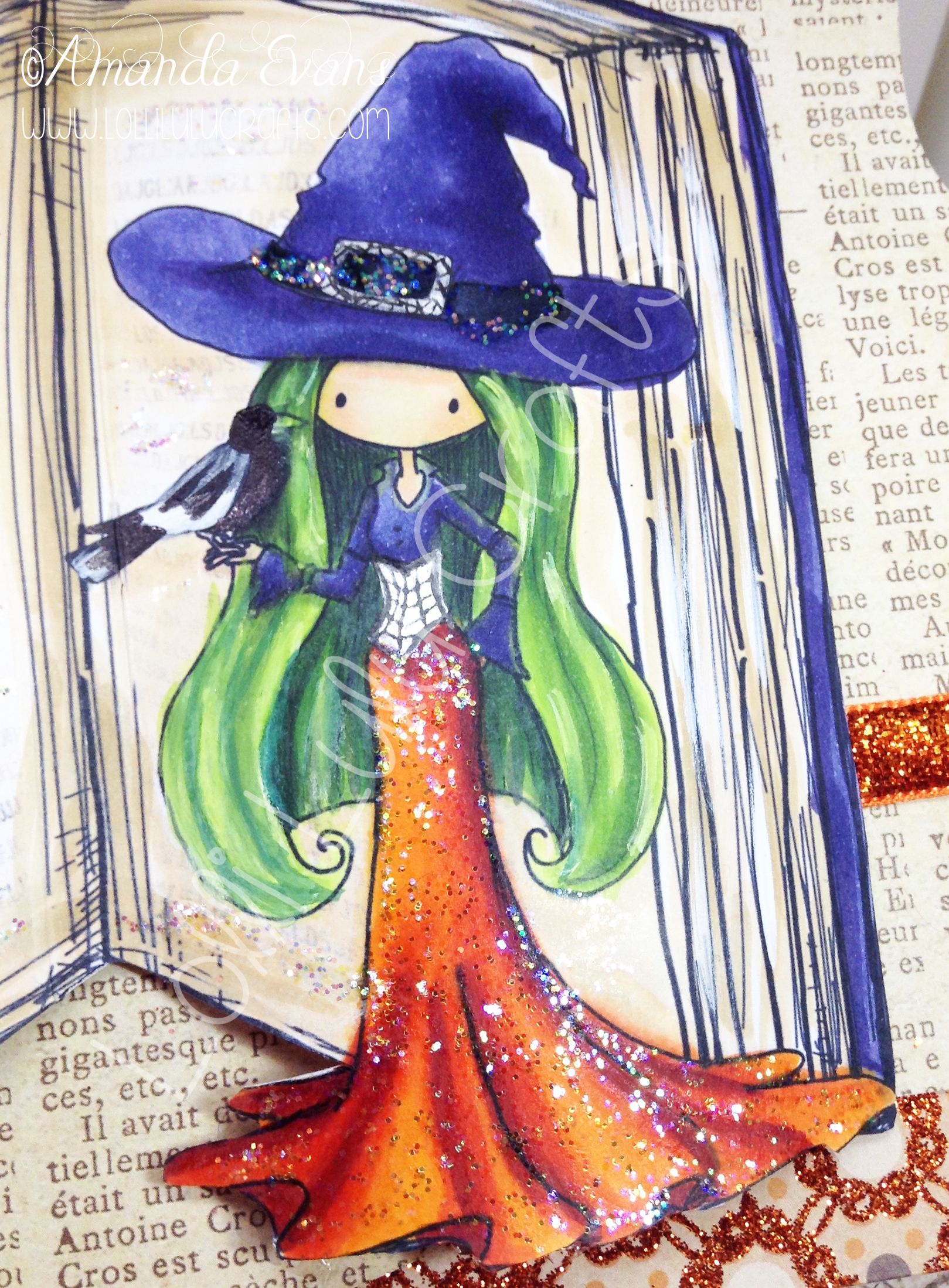 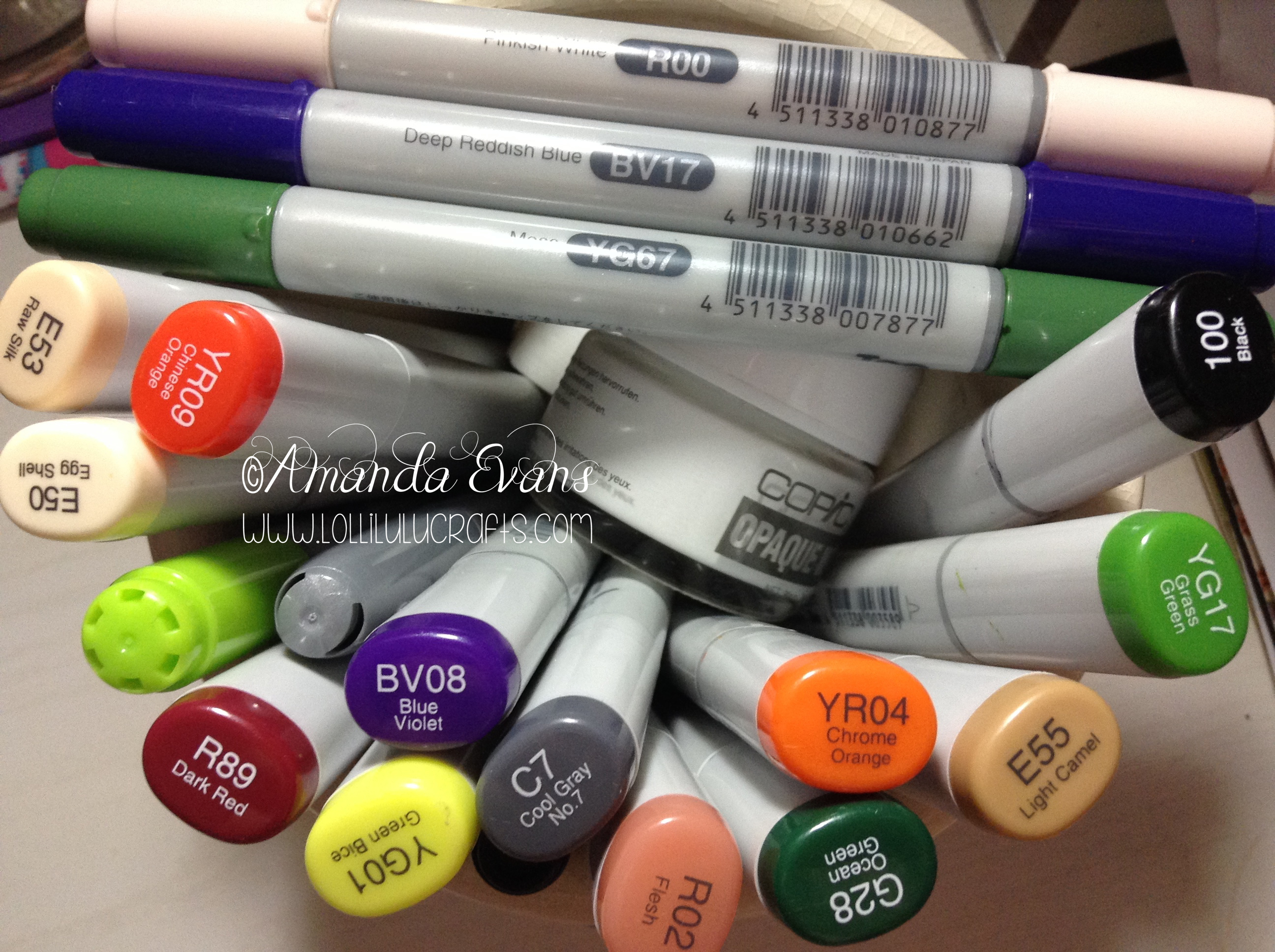 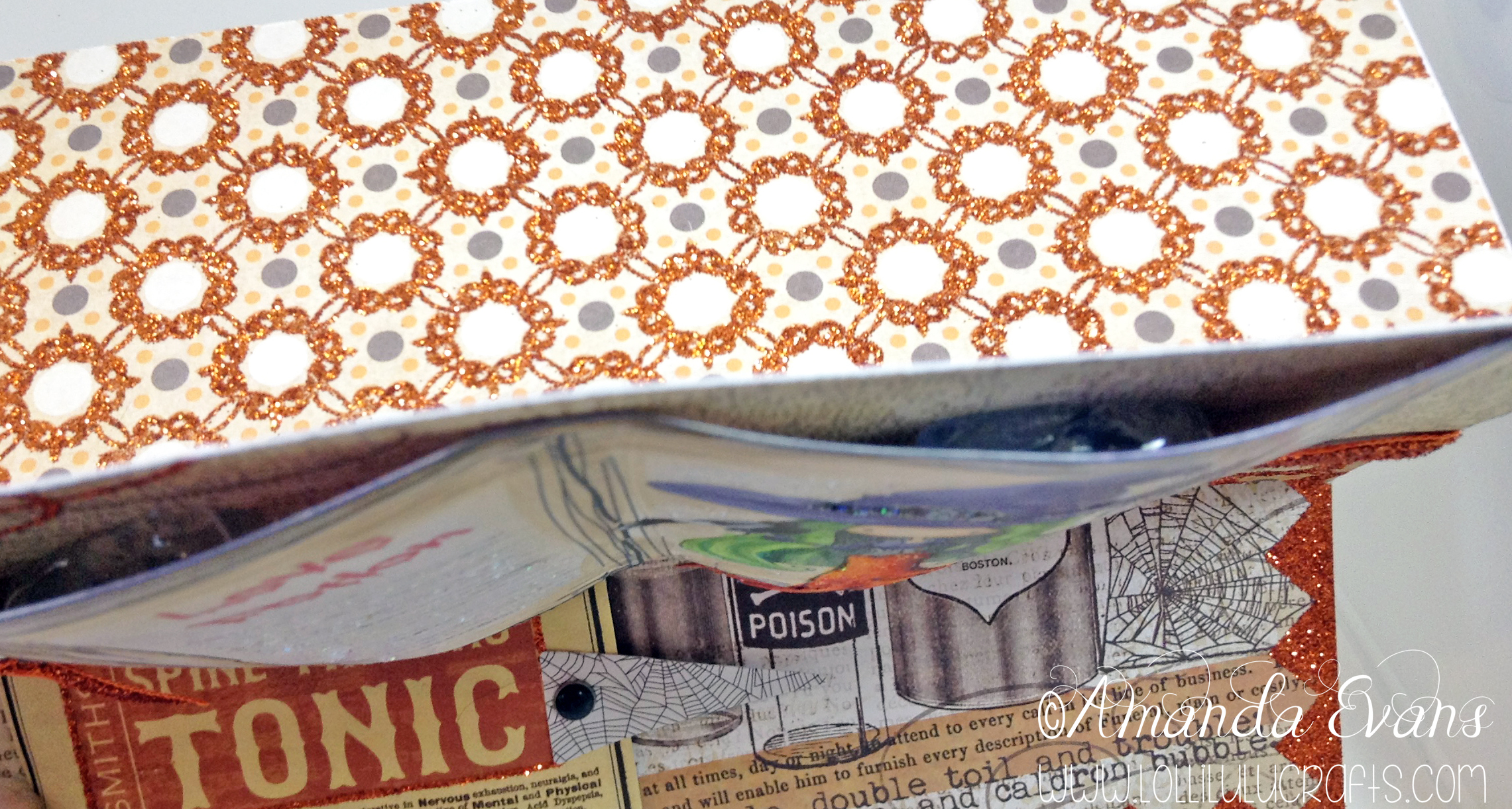 So then I took a pre-scored A5 card and scored the front piece down the centre, folded it back on itself to create my Easel card base. Next I go my Halloween paper pack of choice which frankly isn’t much of a choice since it is all I have left, that said it is my favourite – My Minds Eye, Lost and Found Halloween Collection and started covering the card base and the Easel fold both the front side and the back. I picked out one of the label die cuts to act as my Stopper. I was originally just going to attach the Image, which I had now cut out, directly onto the Easel card making a book shaped top to the Easel. But I just felt that it would lose the curve in the book if I didn’t stick it onto something which would then allow me to put Pinflair Gel Glue behind the curve to keep its shape. So I decided to have a little look in my Cricut Design Space to see if there was a label shape that I could cut out, which would then keep the shaped top to the Easel but give me something to stick the book too. I had also seen this lovely sheet of paper in the pack with all writing on which would be a perfect foil for the book. Plus being double sided it would still look good from the back. I found a great shape in Creative Cards Cartridge #M3B42F Label which I set to 8″ x 5.5″ which meant I had to unlock the aspect ratio button so that I could alter the width and height separately. 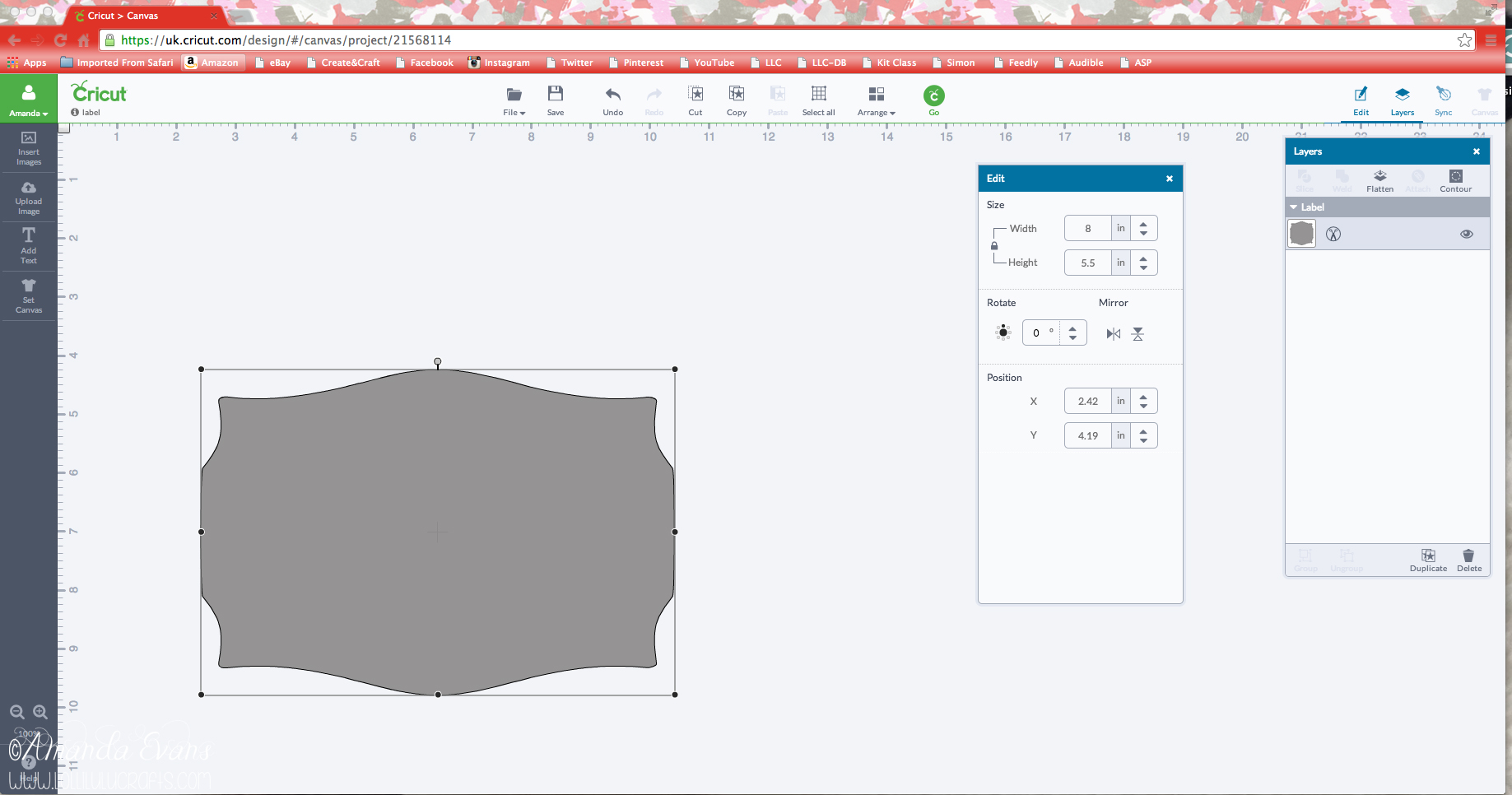 So I cut that out and some ribbon around it before attaching it to the Easel using Pinflair Glue Gel as the paper underneath was glitter so it needed that to stick. Then a lot of glue gel later I popped Allison Witch and the Book to the Easel. Finally I added a brad with a flag attached to our die cut from the paper pack and attached it to the card base to act as a stopper. And there is the finished project, Tiddly Inks Allison Witch & Book Easel Card 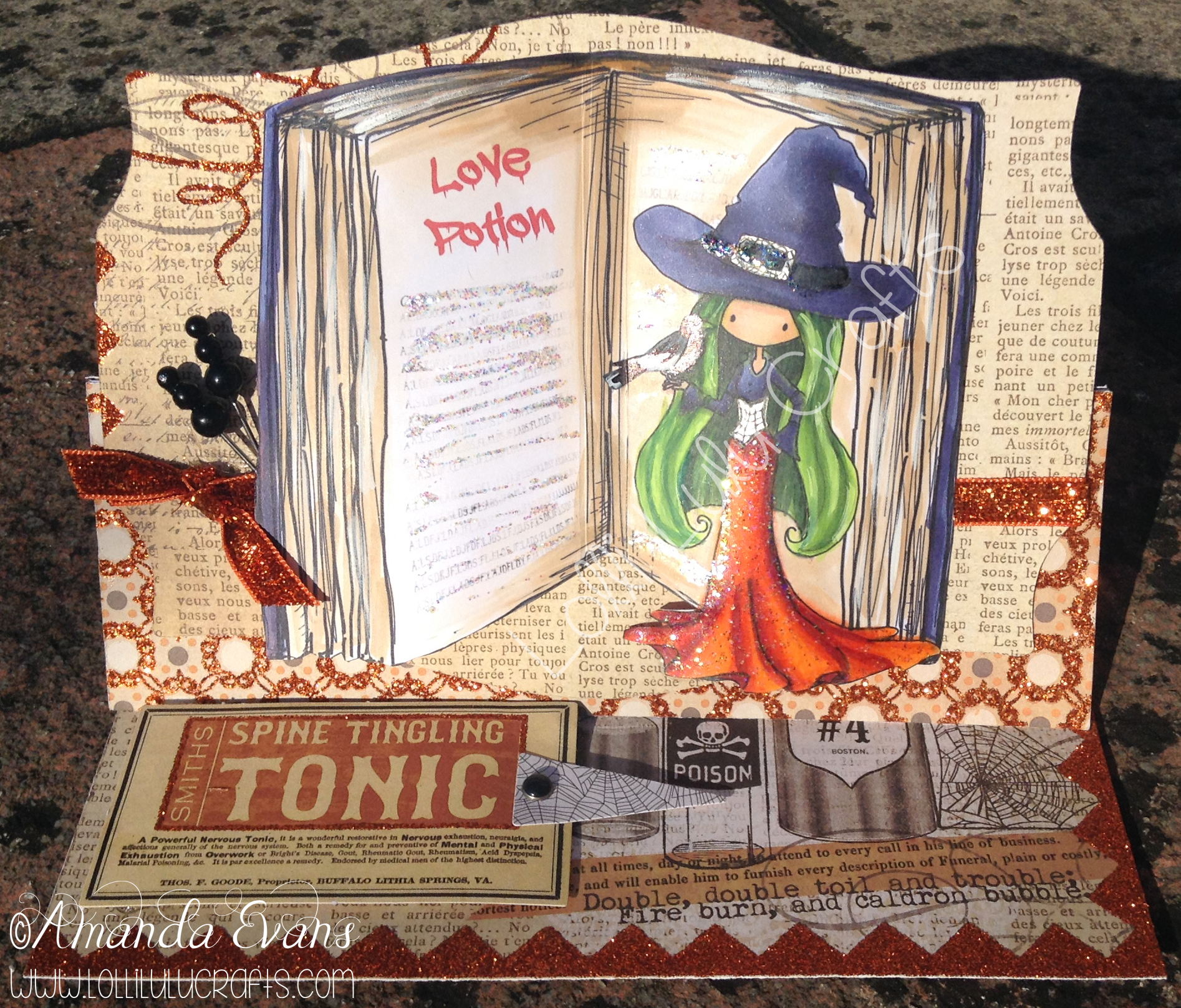 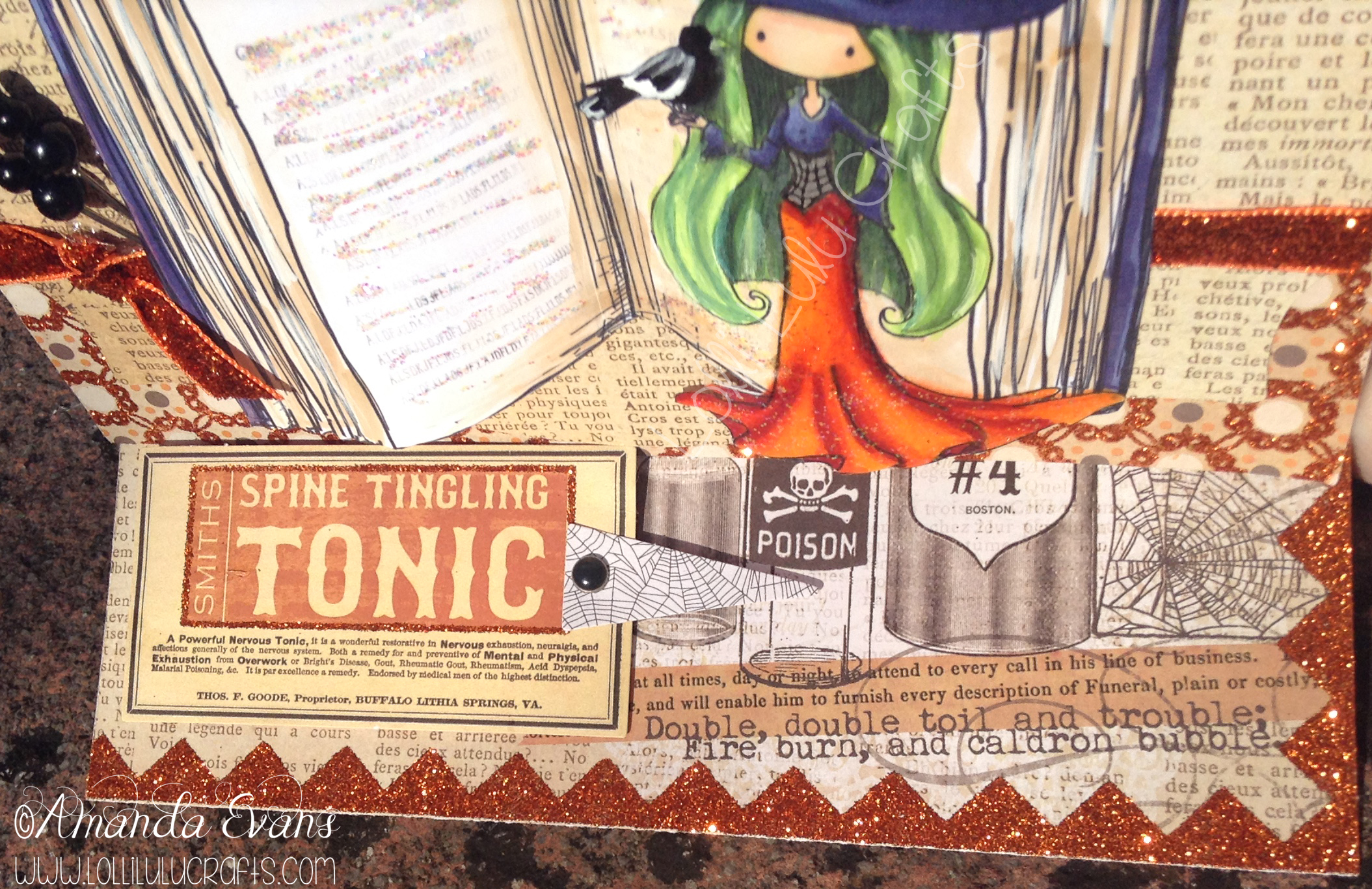 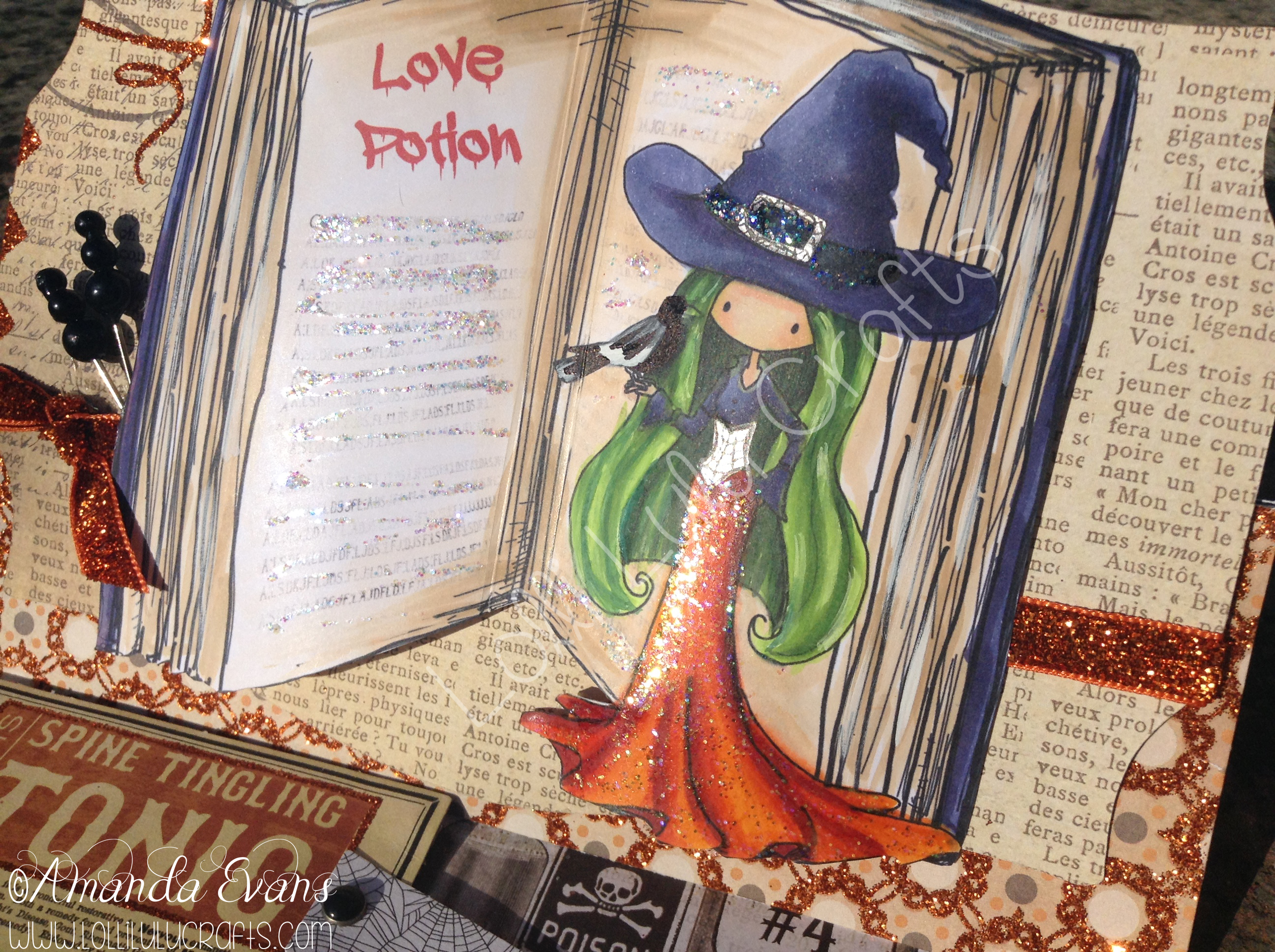 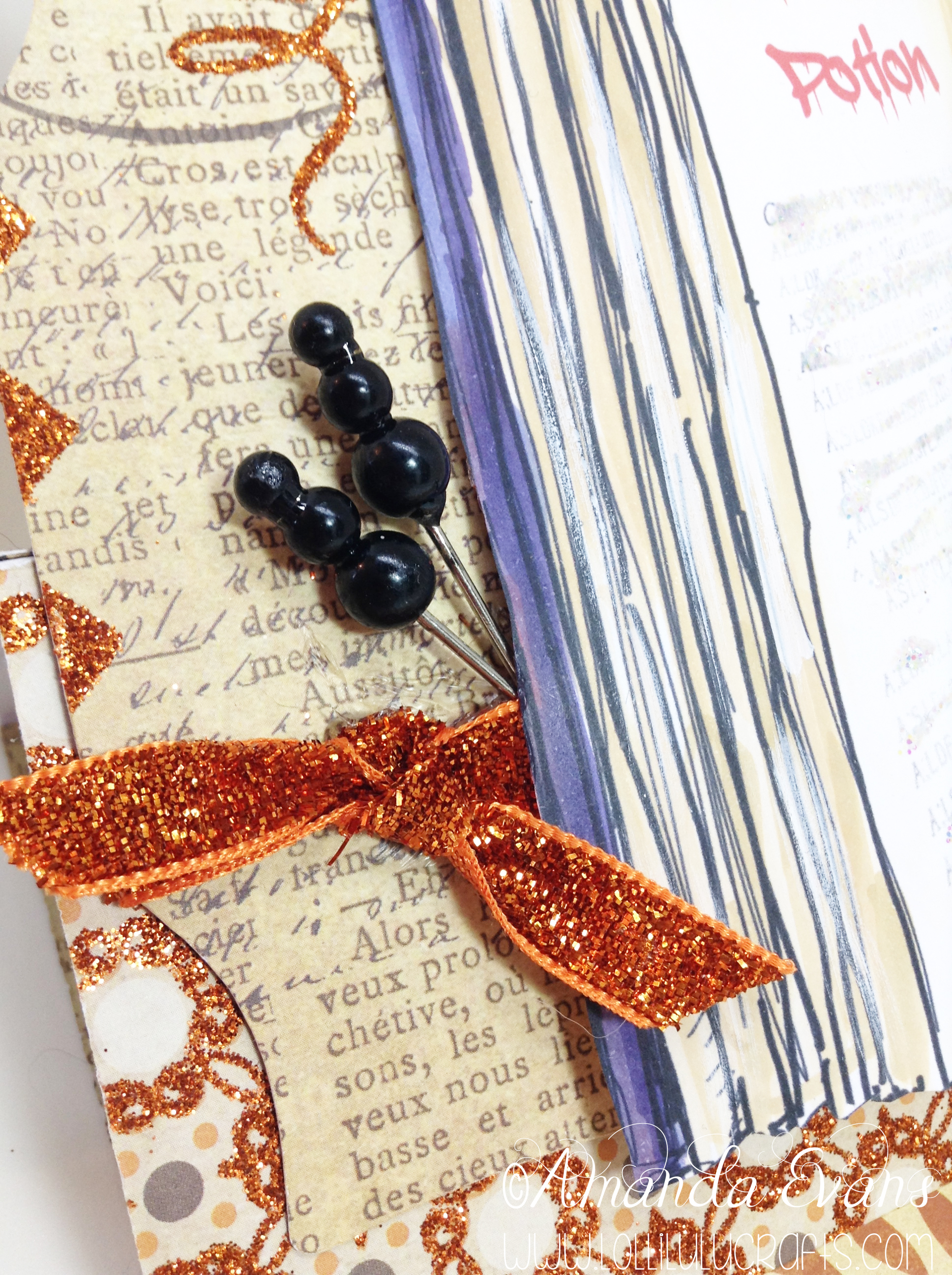 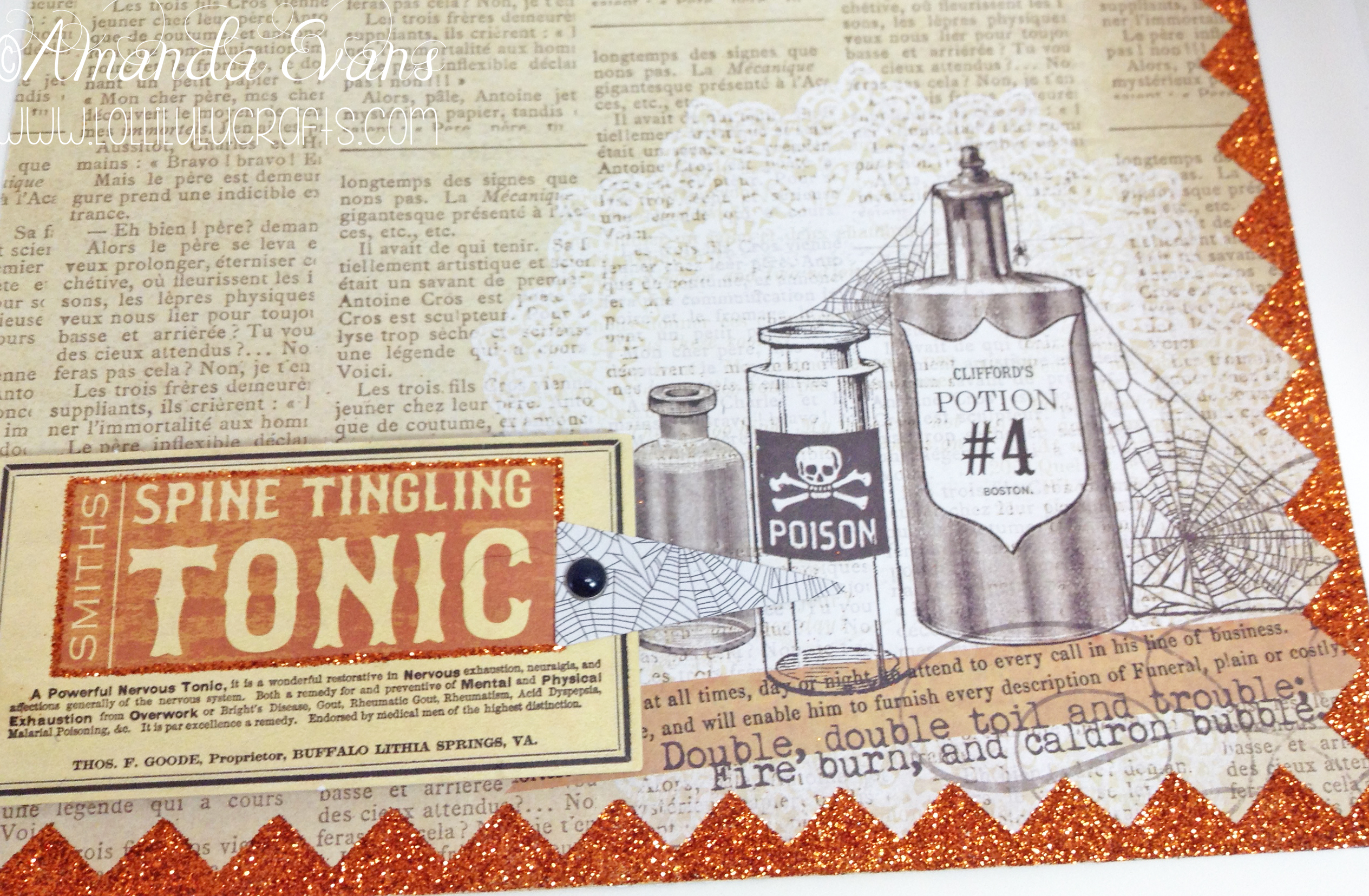 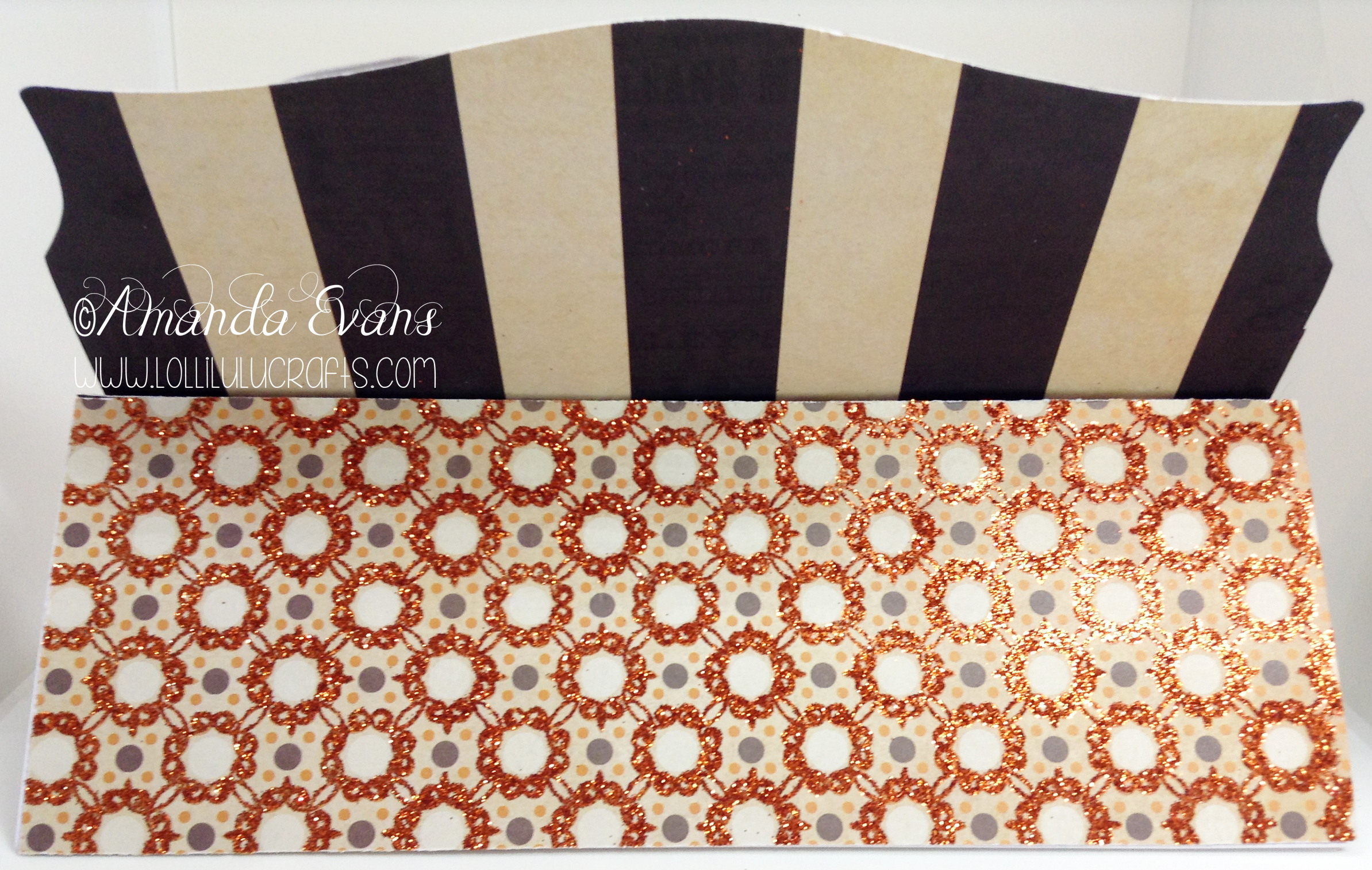 So I hope you liked the card for today, I think she looks a bit pretty for a Witch but I love the card. But then I love that paper pack. SO for now hugs and have a great craft day,